I am an early riser. It must be the home-steader blood in my veins. My ancestors fled Hungry a hundred years ago when the king used to make the peasants fight wars. In those days wars were up close and personal. If you didn’t own a sword or a spear you were shit-out-of-luck. My relatives owned pitch forks and sticks. It was a losing game so they packed up and moved to Canada where land was being given away to those willing to clear and plant it. Anyway I inherited the get-up-early gene from those hardy pilgrims.

My early morn routine is to shower and shave, hit the exercise room, and then write my daily log. On day fifty-seven my plans were to go to the Summerlin area of Las Vegas and meet Dan Aykroyd. He is doing a promotional tour for Crystal Head Vodka. I wanted to talk to him. He is one of a group of celebrities who believe the world, as we know it, will end in the year 2010. He believes in flying saucers. He is a close friend of George Knapp the Las Vegas news anchor who also believes in the UFO phenomenon. I arrived at Albertson’s Market an hour early. There was a line a mile long. People were standing there holding these  skull shaped Crystal Vodka bottles. They were waiting to have Dan Aykroyd autograph them. It was a weird sight. I felt sorry for Dan. He was working his butt off signing vodka bottles. He didn’t have time to talk to anybody.

I went back to the Palace Station. I dressed up in my best clothes and hurried down for the Coasters soft opening at the Bonker’s Comedy Club. A soft opening is a dress rehearsal to prepare for the grand opening scheduled for the weekend. Cost to watch the show was twenty nine bucks. I told Marie, the ticket lady, I was in show biz and had performed at the comedy club a few days earlier. She started laughing, grabbed my hand, and stamped it with a get in free blue tattoo. “Enjoy the show,” she said.

I sat up front. It was probably the best show I have seen in Vegas. The songs were from the fifties. The Sensations, led by Marie Wilson, sang songs that relit memories of the dances we held at Southwestern High School gym way back in 1952. Many of you reading this blog will identify with what I am saying. I know Ellie, Diane, Bud Lusk, Pat, Bill, Lil, Kitty, George and Sylvia will. The rest of you will have to reminisce about your own high schools. I can tell you Southwestern was special.

The Sensations were followed by the best “Elvis’ imitator I have ever seen. I thought he was going to fly apart with his leaping and jumping. He put on a great show. The Coasters wrapped it up by doing all their great hits. I had another fun night in Vegas. If you come to Vegas, be sure to see the show. Tell Marie the ticket lady you know Bob Haig. You may get in free. 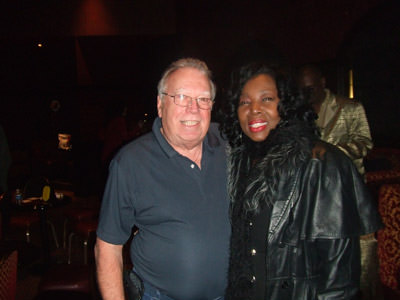 The Firewriter with the lead singer from the Sensations 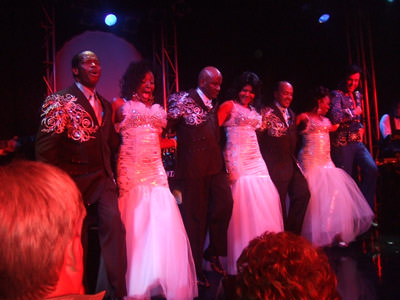 The Coasters, The Sensations, and
Elvis at the Palace Station in Vegas