Let’s talk gambling. My trip around the country has been checkered with periods of meeting new people, doing new things, and sessions of hold-em poker. I even spent a day playing bingo. In the days of yesteryear, when the only place you found gambling was Las Vegas, I would shoot dice. It was usually only once or twice a year. I was pretty good at it. On occasion I would make a big score. Most of the time I lost my ass, but that is the nature of gambling. There are six numbers on a dice table you can bet at anytime. They are at the top of the layout. They are the numbers 4, 5, 6, 8, 9, and 10. These numbers come up the most frequently. The only number that comes up more frequently is the seven. Once a point is established it must be repeated before a seven occurs for you to win. If the seven comes first, you lose. It seemed every time I placed money on these layout numbers I would lose. I was shooting dice at the Gold Nugget one day, and I was losing. When people threw the dice, my numbers would not come up. A person could make many throws and still not hit my numbers. I was complaining about my bad luck like a baby with a wet diaper. A grizzled old man standing next to me explained why this was happening.

He told me after world war two the gremlins were suddenly out of work. You remember them don’t you? They were the little mischievous imps who screwed up our airplanes. The gremlins held a convention on Devil’s Island, in the Caribbean, and came up with a plan. They now live in Vegas and other places with Casinos. They ride inside of the dice at crap games. When a person throws the dice the gremlins look down as the little clear plastic cubes arc high over the table. They get a good view of what numbers are bet. They then make sure the dice land on a different number. They will torture the gambler by allowing many throws before making the seven come up. When you see experienced gamblers shaking the dice next to their ear, it is to hear those little bastards hollering as they get knocked around by the shaking. On some occasions it is wise blow alcohol breath on them to get them drunk. It sometimes gives the thrower a chance to win.

On day fifty eight, I found the gremlins had also included the poker table in their activities. I lost a hundred dollars on one bet and it put me out of the game.  I was dealt the best hand you can get in hold-em poker. It was two aces. I bet fifty bucks. To my surprise another player raised and put me all in for the rest of my money. I knew I had him beat. To our amazement another player called the hand. Inside the dealers deck I thought I heard the cackle of gremlins. I was right. We laid our cards on the table face up. I had two aces and so did the first caller. The other guy showed a pair of fours and the flop came ten, queen, four. The two best starting hands in poker, aces wired, were beaten by three fours after the flop. It was disconcerting to me that the gremlins were now a part of the poker world.

I did have fun in Vegas but tomorrow I will turn eastward. I am starting to get homesick for my friends and family. It is time to head for home. Today will be my last day in Las Vegas. Wish me luck. 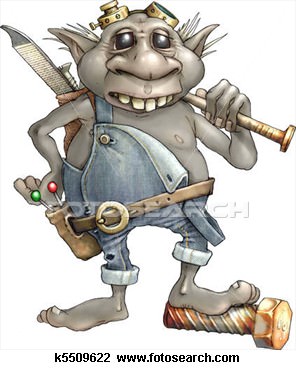