Day fifty-three was like being in a story book. It started in the fitness room. I was doing my one hour walk on the treadmill. I had the machine up to a brisk 2.0, which is really a slow walk. A young lady in sweats came in and joined me. Before I knew it she was doing a full gallop. My macho-side made me click it up to 3.0 but when I started to sweat I geared back to a normal walk speed. I was a part of the “Tortoise and the Hare” fairy tale. Her name was Phyllis and she was a school teacher from Chicago. She knew several Chicago Firefighters. I gave her my card and we agreed to exercise together tomorrow. By the way; the tortoise outlasted the hare. It made my macho-side smile.

A little live action poker made me a fifteen dollar winner. It was not much money but it was on the right side of the ledger. My daughter and her husband Brian arrived last night and we were going to have some fun today. I drove over and parked at the Wynn Casino. I had some time to kill and walked around to see the sights. I was in an Alice in Wonderland World. The architects had gone wild in this casino. It was beautiful. The lights, the action, and the people were pleasing to the eye. I went next door to the Venetian where my kids were staying. It was another chapter in the Fairy Tale World. The theme was old world Europe and if people were wearing nineteenth century clothes you would have sworn you had been taken back in time. Almost every Vegas Casino has a theme. From Caesar’s Palace to New York, New York you can be anywhere your heart desires. It is an awesome place.

We ended up in the downtown area of Las Vegas. This is considered the blue collar section of Sin City. My friend Dick Hoffman told me that if you were wearing bib overalls in downtown Vegas, you were over-dressed. He was right. There was a mix of bag-ladys and divas. There were traditional hobos and kids down on their luck seeking fame and fortune in Vegas. There were well dressed tourists and beggars looking for a handout. In the mix were retirees and tourists. It was a real slice of Americana blended into a fairy tale atmosphere. A crowd had gathered to listen to a guy play songs on his saxophone as a herd of buffalos thundered overhead in the spectacular light show that plays overhead every 20 minutes in downtown Las Vegas. It warmed my heart to be in Vegas once again. I felt my wife’s spirit walk with us. This was her favorite place. Sharon told me she had spread some of mom’s ashes in this mall so her spirit would always be here.

We played Pai Gai in Biniions. There were two Firefighters from Monticello, Minnesota sitting at our table. We talked about the heart and spirit of Firefighters and the closeness of our brotherhood. Their names were Jeff and Neil Kranz. Jeff told me they could not make it to New York to help out when 911 occurred but 17 members of his department had their arms tattooed as a silent form of allegiance to the Firefighters who had sacrificed their lives on that fateful day.

When we left I was cornered by two pretty ladies who wanted to take a picture with me. One of them put her hand on my buttocks and pinched my nipple. I was in the grips of a couple of street smart gals. I reached back to make sure I still had my wallet. The pincher smiled and said please place a donation in the proper place. I resisted an urge to pinch back because my kids were watching. I put a five dollar bill in the donation location and we called it a night. On the way back to the hotel I was wondering if that irritating pinch was my wife’s spirit reminding me to keep my fun wholesome. It had been a great night in that Fairly Land called Las Vegas. 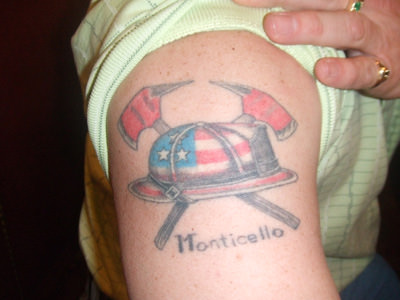 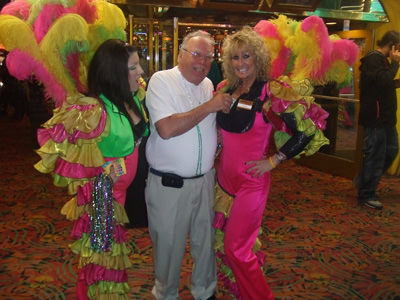