I thought I left the North Pole when I left Michigan last month. I discovered there are two North Poles. One of them is in Biloxi, Mississippi. I had to scrape my windshield in the morning with the backside of my comb. I didn’t leave home without my master card and next time I will not leave home without my ice scrapper. I had enough. I packed my things and headed for Texas.

I was going to stop and check out the Mardi gras in New Orleans but the man at the traveler’s aid said there were no accommodations. It was still cold and I didn’t bring a winter dress so I figured I wouldn’t fit in anyway. The last time I was in New Orleans I visited a Voo Doo Shop. I wanted to buy a curse to stop Mayor Colman Young from destroying the City of Detroit. The Haitian looking proprietor said he didn’t have a curse powerful enough to do the job. He tried to sell me some dried monkey arms.  He didn’t tell me how to use them. It was a scary Voo Doo shop.

I traveled over 500 miles before I got tired. I decided to stay in Lake Charles, Louisiana. When I got there I found it was the oil and gas refinery for the world. As far as the eye could see were gas cookers and smoking chimneys. It looked like a Firefighters nightmare and it made the Marathon refinery in Detroit look like a mom and pop operation. The pollution was so thick you could get high by rolling down your car window. I moved on until I crossed the Texas border.

I went in to the Texas travelers welcome center. Three good old boys in bib overalls were standing by the front door talking. I asked them if football was played in this state. I didn’t get an answer. I did get a glare that would make a rattle snake quit shaking his rattle. Inside I was told that Weenie, Texas was just down the road and the rooms were reasonable. I didn’t like the sound of the town’s name but thought I would stay there for one night. When I got there I found the town’s name was Winnie. I think I am going to have trouble communicating with these Texans. I know I didn’t make a good impression with those good old boys.

I ate at the local diner. I asked if there was a bar to get a beer. I was told it was out back. I went outside and around the corner and found a small bar. I went in. It was dark and when my eyes adjusted I found there were several good old boys in bib overalls drinking beer. I kept my mouth shut, drank one beer, and turned in for the night. It was good to be in Texas. 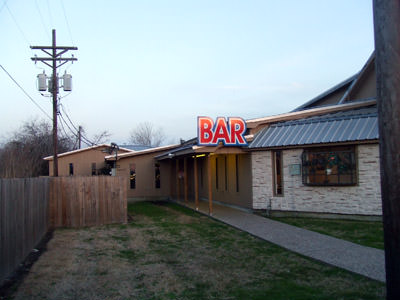 Good old boys bar, out back in Winnie,Texas.