It was time to leave. I gave Linda and Mocha the cat a hug. Joey walked me to my car and I gave him a hug too. I was headed back to Las Vegas. I wanted to get there early so I could rest up. Sharon, my daughter, and Brian, my son-in-law, are flying in on Thursday and they always make me drink beer with them. The weekend looked like it was going to be fun. I paused at the end of the driveway to take a picture of the house. It is gorgeous and it sits on the top of a mountain. I could smell the aroma of flowers in the air. It was spring in Southern California and everything is green. Joe told me the danger of having too much spring growth is the fire hazard it presents in the fall when the Santa Ana winds dry things out. Several years ago the people in this area had to be evacuated when wild fires roared through the gorges and valleys of this community.

The drive down the mountain was like being a ball in a Plinko game.  You switch back and forth as you descend. The roads are narrow and curvy. It adds to the beauty of the neighborhood but I could see it would be difficult for fire apparatus to respond quickly to an emergency. It would also be hard to flee this area if a fast moving fire was approaching. Just before I got to the freeway I stopped at the local Fire Hall. There were three hard body young Firefighters on duty. They introduced themselves as Jason Lewandowski, Dan Twohy, and Omar Ali. They explained the difficulty of responding to structure fires. The switch-back curvy roads delay their response. Jason said most house fires are fully involved by the time they arrive on the scene. They agreed that fall is their scary season. It is this area’s Detroit Devil’s Night. When wild fires break out firefighting becomes a deadly occupation. Jason said that communications is the key. I thought about what the New York Fire Department went through on 911. They had some serious problems with communications. Several crews have been lost fighting these wild fires in the San Diego area. The things these young Firefighters told me were interesting and supported, in my mind, how important experience is. They were cooking breakfast and invited me to eat with them. I declined and thanked them for their time. It was good to be with Firefighters again.

I didn’t travel far. I decided to eat at Costcos. If the food sampling stations were open I could graze my way though the store. If I was still hungry I could put my hat on backwards and make a second trip as another person. Alas, I had to settle for a chicken bake and a coke. Outside the store there were rows of tents set up. It was a giant flea market. I walked around looking at the goods. I discovered a pretty lady selling Emu Oil. She said it cured arthritis, upset stomach, skin rashes, hearing problems, carpal tunnel pain, and numerous other maladies. I asked her if it grew hair. She said it did and I bought a small bottle for twenty bucks. I figured I could dilute it and sell it to all my elderly friends and make a profit. I knew the bald guys would buy it. The young lady said her name was Marcella and she was a surfer girl from Riverside. A man who looked like a young Caesar Romero came out from behind her stand. When he smiled the sun gleamed brightly off one of his incisors. I was sure he was a gigolo. He offered to take our picture. Marcella fluffed her blouse to show some cleavage, grabbed my arm and rubbed some Emu Oil on it. When I drove away I noticed the hair on my one arm had grown longer. Maybe this stuff works. I will try it on my friend Charlie when I get back to Michigan. Who knows, I may become the mid-west distributor for Emu Oil.

I made Vegas late in the afternoon and checked into The Palace Station. I got into the 4/8 live hold-em game and won $93 bucks. I still have a long way to go to recoup my tournament loses. It is always fun to be a winner. 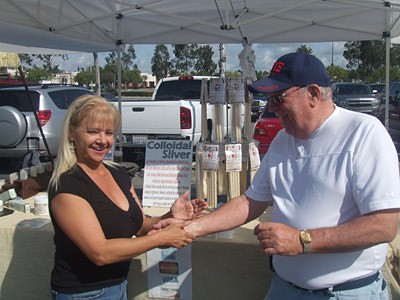 A surfer girl rubs Emu Oil on my arm 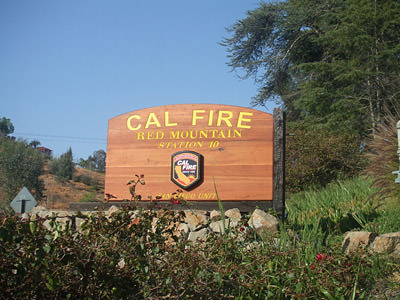 A stop at station 10 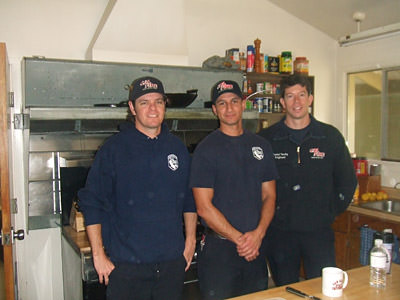 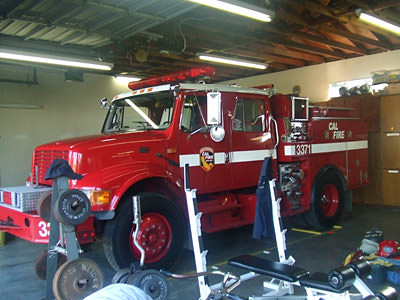 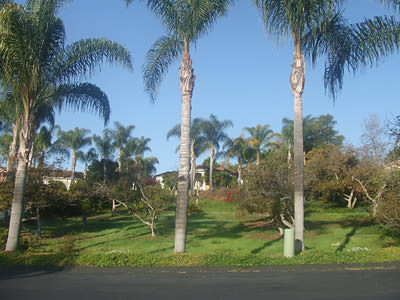