Day forty-seven started with a mild hangover. I ordinarily limit myself to three or four beers a day. Last night I got involved with those wild sky divers and Viking girls. The sky divers wanted to toast all the championships won by the Detroit Tigers and the Red Wings. They kept ordering Jager bomb shots. We had a lot of fun but when I got off the stool to leave I found my legs had a mind of their own. I slithered into the elevator like a snake and curled up in the corner for the ride to the ninth floor. One of the riders asked, “Having a good time mister?” In my best Finnish, I told him I didn’t know because I couldn’t feel my body and my legs were on backwards.

I took pictures on the way to Pahrump to visit Jake and Pauline. The clouds hung low in the mountains outside of Vegas. These mountain roads can be treacherous in bad weather. I arrived in time for the afternoon bingo session. I strapped on my red babushka and entered the bingo hall. Jake introduced me to his friends. Several had been big winners. The game had changed since I first played it in the basement of Holy Cross Church. You still have cards to play but you now use a marker pen. No more little round plastic markers that get goofed up when someone bumps the table. There are also electronic devices now available that work like a mini television. It does all the work for you automatically. We had fun but only scored one $100 dollar winner among the group of us playing. I had a nice visit with my friends. It was good to see someone from back home. When I left it was dark and raining hard.

Those clouds I passed coming through the mountains had opened up. It was pitch black with poor visibility. The trip back was approximately 50 or 60 miles. The first road sign I passed leaving Pahrump warned of a flash flood area the next twenty-five miles. It was hairy driving. I kept thinking about the television images of cars being swept away by flood waters. I zeroed in on the set of taillights ahead of me. If those lights suddenly disappeared, I was going to turn back and stay the night at Jake’s place. I mentally registered the mileage I had to cover to get out of the flash flood zone. It was slow going but I made it to the mountains where the rain had turned to a heavy snow. I was back in northern Michigan in a howling snowstorm. The roads were slippery and dangerous. It was the toughest drive I had incurred during my entire road trip.  The winter of 2010 was determined to stick with me for my whole vacation. It took a long time but I made it back safely and went to bed early. This morning I looked out my window and thought I saw a flying saucer. I made a mental note to not drink Jager bomb shots anymore. 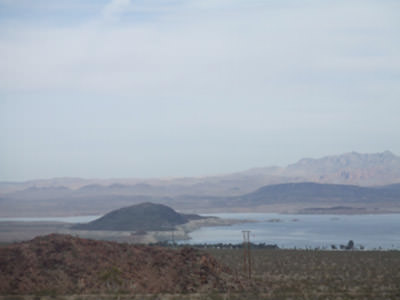 Clouds hang low on the mountains near Las Vegas