Tomorrow am leaving my daughter’s house in Oviedo, Florida. I will be going Lady Lake. It has been fun and I met a host of characters in this area. I also received a new name. It is Ace-in-the-hole Bob. It is a great tag for a poker player. When I used to shoot dice, the Ojibway Indians at the St. Ignace, Mi. casino gave me an awesome “dice shooter” name. It is Hard Ten Bob. Indians name people for things in nature, like Running Bear or Two Dogs Kissing. I got my moniker because I shot three hard tens in a row at the dice table. I made some bucks that day and the chief who ran the table pronounced I would be forever known as Hard Ten Bob. When I got back to work my fellow firefighters thought the name meant something else. I asked my daughter if I could rename Boogie the Hermit Crab. I’ve been taking care of him and his girlfriend for the last two weeks. She said yes. Boogie is now called Son-of-the Beach, and that does mean something else. I also got even with that smart-ass crab, for giving me such a hard time. I bought two more female hermit crabs to keep him company. He will now get more sex then he can handle, and will have three females to nag him about keeping the cage clean, walking the sand flea, and doing all the jobs a woman can think of for a man to do.

The last time I was in downtown Oviedo, I stopped at the fire hall for directions. In the entrance was a memorial for Firefighter Shane Kelly. I stopped back today to find out what happened to firefighter Kelly. It was late afternoon, so the only person up was a young fireman named Josh. He told me that Shane was off duty when he came on the scene of a terrible car crash. He stopped to give assistance. He was kneeling in the street, stabilizing a victim who was injured, when a tractor trailer plowed into the crash scene instantly killing Firefighter Shane Kelly.

My thoughts rolled back to my time on the job. I had attended many members’ funerals. The common thread among all Firefighters is their dedication to duty. The Oviedo Fire department is small. There are three Fire Houses with a staff of 46 paid Firefighters. It doesn’t matter how big a department is. What does matter is that intangible quality that is inherent in the Fire Service. It is a spirit of commitment to help others, and it is laced with a fearlessness to face danger when protecting and helping people in a time of need. Through the sadness of losing a member, the Oviedo Department gave firefighter Shane Kelly a proper Department Funeral. It was well attended by many other departments. They erected a memorial to Shane’s memory in his Firehouse. Shane was a handsome dedicated young man. As I left the Fire Hall, I shook the hand of the young firefighter who told me the story about how Shane Kelly lost his life. In that handshake I felt the heart and soul of the Fire Department. It was good to be home again, even if it was only for a short while. 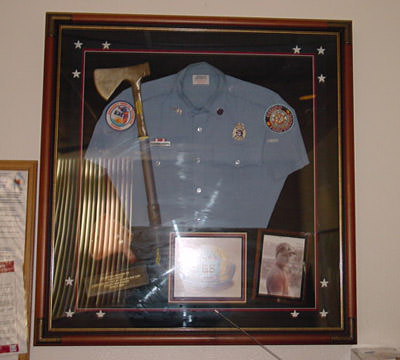 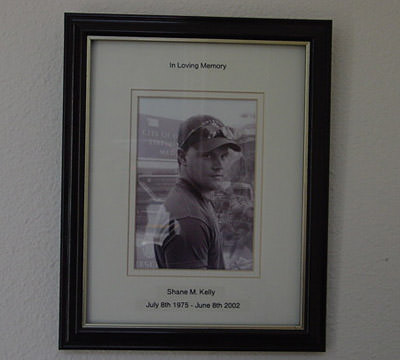