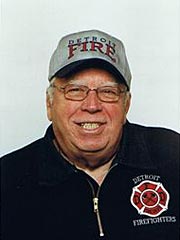 R.J. Haig was born in Detroit Michigan in 1935. He lived in a section of the city known as Delray. This part of town is in the heart of the Seventh Battalion. When he went to work as a Firefighter he was assigned to this area. He spent his entire 30 year career in the Seventh Battalion. He retired as Captain of Ladder 13.

He was educated at Wayne State University and Henry Ford Community College. He has degrees in management and fire science. He gained writing experience as editor of the Firefighters Magazine. This was during his time as Seventh Battalion Director for Local 344 the Detroit Firefighter's Association. He also served that union as vice president and president during the turbulent 1980s.

He was appointed Sergeant of Arms for the International Association of Firefighter's convention in 1986. R.J. Haig sat on the executive board of the Metropolitan AFL-CIO. He served on the selection committee of the Metropolitan Realty Corp. He was charged with distributing funds to help investment in the City of Detroit. He was Fireman of the year in the Seventh Battalion in 1976. It has been the purpose of his life to promote the Fire Service.