I was up early. It was still dark. When I turned the lights on in the living room I caught the hermit crabs wrestling again. They scurried for their shells and disappeared. Boogie stuck out his claw and gave me the finger. I am now sure the wrestling thing is really the two crabs having sex.

I loaded my Tom-Tom GPS and took the 70 mile drive to Lady Lake. At the first toll booth a Hispanic looking man reached out for my fare. I decided to try out my Spanish. I said, “Buenos dias senor, como se yamma.” ( good morning sir, what is your name?).  He said, “I don’t speak Spanish. Please move along.” The guy behind me started to blow his horn. It made me think, I had better learn some Spanish swear words.

I arrived at the Recreation Plantation. It is a large trailer park filled with park- units designed for efficiency and comfort. As I entered I could see people playing bocce and shuffleboard. A large pool near the entrance was full of bathing beauties twenty-five years past their prime. It looked like they were having an aerobics class. They smiled and waved as I slowly drove by. They all had platinum blond hair or maybe it was white hair. This was a friendly place.

Sue and Charlie were waiting for me and I got hugs from both of them. It was good to be with friends again. We walked to the large meeting hall where Charlie paid for my lunch. It was a great meal. We sat with a pretty lady named Ellie. This is the second Ellie I now know. The other one back in Michigan is a beautiful lady too. The down south Ellie told me she is an avid bingo player but also likes to play hold-em, a very interesting woman. She also directs some of the entertainment for the Recreation Plantation. They recently had a senior prom dance she called the senior senior prom. Everyone was dressed in formals. I found out that that a tux can be worn with shorts. The activities at this trailer park go from wood carving to ax throwing. There is something for everyone.

I found out there is no free lunch. Charlie made me carry in some heavy boxes of computer related devices to a computer room. They were conducting a meeting for anyone interested in computer issues. Charlie was donating stuff to the computer club.

A guy called Lee conducted the program along with Bill and John who were also computer experts. A lot of what they said was at a level I did not understand but some of it was very helpful. The best piece of knowledge was some of the error messages or directions a person gets from a computer is not understood,  even by experts like these men conducting the class. I always suspected that.  Bill tore down an Acer Lap Top and explained the function of each part. When the class was over I knew I had moved closer to my 12 year old grand-daughter in computer expertise. We finished the afternoon visiting and rehashing old fires. We were joined by Len Bartlett who is another old 7th Battalion running mate of mine.  We finished off Charlie’s wine, I got hugs from everyone and I headed back to Oviedo to play in the hold-em tournament at the Green parrot.

The Green Parrot is a biker bar. It s is a friendly place with a good mix of old and young people. A place you could call the cross road of cultures. There are guys with ponytails, good looking waitresses with tattoos, Blacks, Whites, Hispanics and Asians mingling in a way that all society should. I had a fun night and made the final table before a young guy beat my flush with a full house on the river. It was an all in situation and I was out of the game. The guy jumped up and did an end zone touchdown dance that would have made Terrell Owens look like an amateur. His curvy seductive Asian girlfriend ran around the table and gave me a big hug. I enjoyed the hug so much I threw my hanky on the ground and asked for a review with a couple of instant re-plays. They smiled and pointed toward the door. It was late and I headed home. My last fun of the night would be flicking on the lights and catching Boogie and his girl friend Oviedo making out in their cage. It was a good day twenty-three. 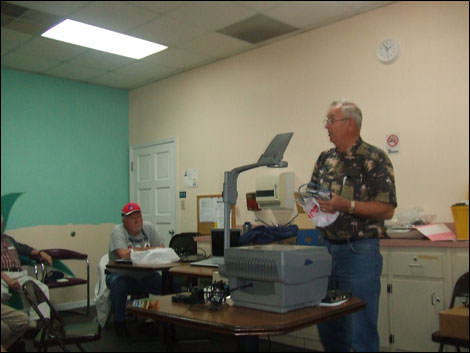 Geezers at a computer class. 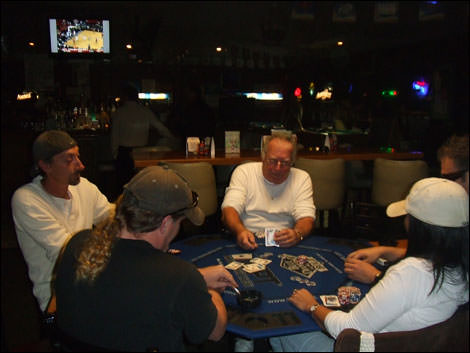