Day twenty-nine is a travel day. I got a hair cut before I left Lady Lake. I didn’t want to enter Texas as a long haired hippie. I will buy cowboy boots and a ten gallon hat when I get there. I want to blend in. I drove through the Florida Panhandle in a cold blustery rain.  After 500 miles I pulled off in Pensacola. There are military attractions in this area that I would like to see. My friends, George and Willie, back in Detroit told me to pick up hotel/motel discount coupons at a rest area. I got a neat one that said to get off of route 10 at exit 7. It was getting dark when I pulled into the Garden Inn. The coupon promised high speed internet, cable TV, comfortable rooms, and a lounge with live music. The price of the room should have been a warning sign, it was only $39.00.

A skinny short guy dressed in a sari greeted me with a bow and signed me in. He explained the extras the motel offered. I think he was speaking a Mandarin dialect. I answered him in my best Spanish and after a lot of bowing and smiling I went to my room. Near my room was a portable basket ball backboard with a group of kids shooting baskets. One of them, in long baggy shorts and a baseball hat with the bill on the backside, promised to watch my car. I gave him three bucks.

The room was clean but everything was old and worn. I flopped on the bed and noticed, what looked like, a couple of bullet holes in the bed cover.  It was not the best neighborhood but, what the hell; I grew up in a tough neighborhood. I decided to try out the motel lounge. I followed a big truck driver to the entrance. He stopped and held the door open for me. It was like stepping into a darkened cave.”Watch your step partner,” the truck driver warned. I put my hand out to feel the wall and moved down a hall. There was a turn and then another short hall. I could see light ahead. I stepped into a large dimly lit lounge that looked like a scene from a 1932 Humphrey Bogart movie. There were three women and an old guy sitting at the bar smoking. One of the women was the bar maid. She left her drink to go behind the bar to serve me. The girls had a lot of mileage on them but were semi-attractive. The juke box was playing country western music. The guy started to talk to me. He had a hearing aid and when I talked back I knew the hearing aid was not working. I thought about trying my Spanish on him but didn’t want to cause trouble. As my eyes adjusted to the dimness I could see a dance floor. The bar maid said they have music every night. The Great Gomer was appearing at 8pm.  I drank a few more beers and the girls went from semi-attractive to darn good looking. It was eight o’clock and in came Gomer. He put his chair and sound system on the stage and started to play a harmonica.  It was enough fun for me. I looked back, before traveling the black maze to the front door, and the three bar girls were now drop-dead-gorgeous. I thought, man they serve good beer in this joint. 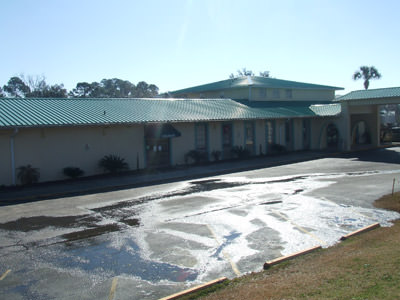 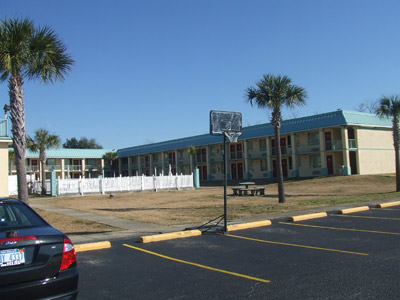 No kids in the morning, but a hood meeting place at night.