On occasion a firefighter or police officer has to attend a funeral when they lose a running mate or a partner. They are sad events, but they are always well attended and are performed with the intent of honoring the lost warrior and easing the pain for  his or her family. Recently Keith Bettinger, a retired Suffolk County, NY police officer, sent me a selection he penned about a funeral for a NYFD hero. It is both poignant and touching. I thank Keith for sending it to our website.

FAREWELL TO A HERO

The week of October 8, 1995 has brought pain to New York City and it's uniformed forces.  Sunday night, October 8, Firefighter Peter McLaughlin, thirty-one years old, died fighting a fire.  He and his partner were making a search of a burning building to see if anyone remained behind.  They were members of the elite, Rescue 4.  They were the experts in search and rescue.  The ones you want to come looking for you if you are trapped in a burning building.

While conducting the search, Peter's partner saw a glow.  A glow that tells an astute firefighter what kind of horror and terror is about to come next.  The hallway erupted in an explosion of heat and rolling flames.  Peter's partner broke out a window and called to a ladder crew that they needed help.  As he called for help, the ladder truck swung it's bucket to the window.  Valiant FDNY members were able to pull Peter's partner, who was seriously burned, from the ledge, but, it was too late for Peter.  No matter how hard they tried, they could not get in and rescue Peter.

Long Island is referred to as the "bedroom community" of New York City.  It is where many of the New York City firefighters live and raise their families.  The community of Northport, NY, where Peter grew up, reached out to the McLaughlin family and the New York City firefighters who came to pay their respects.  Local police provided an honor guard at the door to the funeral parlor.  Plans were put in place so that firefighters and others, attending services on Thursday morning, could pay their last respects, as Peter was carried to his final resting place.  He was carried on a fire truck of the department he so loved.

Approximately 10,000 firefighters gathered on Thursday morning to honor Peter.  They came from New York City, not only because he was one of their own, but, because he was from Rescue 4.  They knew if they ever needed him, he would have been there to help them.  There were firefighters from many cities in different states.  They were the professionals that fight fires for a living.

There were also the volunteers.  The members of the many local community fire departments who give not only their time but their family's time as well, so that their communities remain safe.

The uniforms were neatly pressed, the shoes were shined, and the badges were covered with black mourning bands.  The patches and the badges told what departments they were from and how far they traveled, but everyone knew it was respect for a fallen hero that brought them all together.

As they stood in ranks, they came to attention as they heard the sound of distant muffled drums and pipes.  As Peter's casket was removed from the fire truck by an honor guard of his friends and coworkers, a piper played a haunting melody.  Arms were raised in a crisp salute.  Some arms started to shake and many eyes were moist.  Military precision and human emotions - signs of respect for a fallen hero.

The eulogy from within the church was heard by those gathering to pay their respects.  The ranks stood in quiet contemplation.

As Peter was removed from the church, the ranks once again sprang to attention.  The piper played as Peter was carried to his fire truck.  As the procession departed, firefighters stood rendering a final salute, as the honor guard marched alongside the truck, to the cadence of muffled drums.  The truck Peter was carried on, passed beneath two raised aerial ladders. The ladders almost touched over the center of the street.  Flying from the ladders was a large American flag.  This tribute stood, as if it was a special gateway to heaven for the fallen firefighter.

Less than two weeks before, at a parade in Westhampton, Long
Island's citizens honored all the firefighters who fought a wild fire that ravaged part of the east end of the island.  They cheered and held up signs praising all the firefighters for their heroic efforts.  Now members of the community stood amongst the firefighters where there were openings in the crowd, or on lawns and porches overlooking the processional route.  They stood with hands across their hearts.  Although for many, New York City seemed a world away, they still stopped to pay their respects to a fallen hero who has answered his last alarm.

I have enclosed a picture on a card given to me by a member of the Axe Men Motorcycle Club (Detroit Chapter). They went to a funeral for Chicago Firefighter Edward J Stringer Sr. who lost his life in the line of duty on Dec.22,2010. I believe the card says it all.

We will always remember the sacrifice of Ed Stringer and Pete McLaughlin. 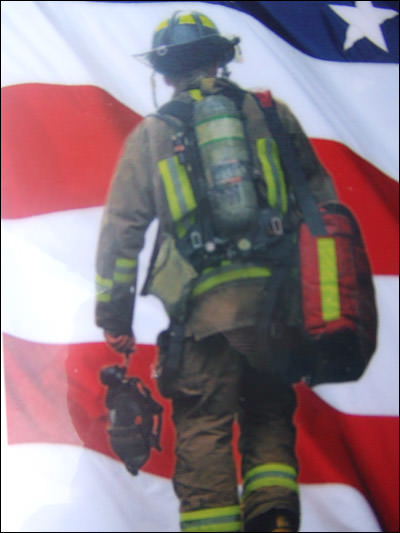