Christmas at the Firehouse

Ladder 8 and Engine 27 had the best cook in the fire department. His name was Johnnie Brycz. Johnnie was a creative cook. He could take a piece of beef that had walked from Texas to Detroit and make it tender and tasty. His Polish cuisine would make you do the polka. One of his specialties was world class tacos. You may recall, John was the cook at the 7th Battalion Taco eating championship between Loomis and Baxter. He was good.

John was a quiet man with a poker face. When the guys would complain or make fun of some of his creations, he would just keep plugging away without a comment. One of his most important jobs was to buy the Christmas tree for the engine house on the annual holiday. I can never remember John ever buying us a beautiful tree. It was always a scraggly looking fir tree with missing branches and a bad case of falling needles. The guys accused John of buying last years rejects. The trees were atrocious. We would bitch, at our poker faced cook, when we were decorating the tree. John would just keep stirring his soup without a hint of emotion.

As I look back at those days, running with that special group of Firefighters, I now realize how important it was for John to buy a ratty tree. He knew the guys would jump all over him. In his heart he enjoyed the attention. He also knew the money he saved on the tree would go into the food he bought for our Christmas dinner. He made our day away from our families a special occasion. It was all in the spirit of Christmas. It was a special time in my life.

During this holiday season I want to wish you all a Merry Christmas and a Happy New Year. You active guys be extra careful when working a fire. You retirees thank the lord for taking you safely through your time on the job. To all my civilian readers I want you to know all your Firefighters are proud to serve you. 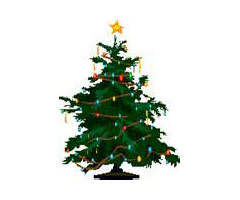