I recently received an e-mail from a man who retired with an injury he sustained while rescuing another Firefighter. His picture hangs on the wall of Engine 31s quarters. Today nobody can put a name to the picture. It is well over thirty years since this man retired. Memories of his actions at a fire, where a running mate was trapped, have long ago faded like the smoke of the many fires we went to. A lot of you old timers will remember George Delich. For you guys now running at E-31, this is who the story about the picture that hangs on your engine house wall. He was a husky flamboyant Firefighter who reflected the attitude and spirit that remains to this day at Engine 31 and Squad 4.

What happened that day? Here is the story as told to me by George Delich.

I was assigned as Chief’s aide and was driving Acting Chief Jimmy Gleason that night. On arrival at the scene Firefighters indicated there was a serious problem. One of our guys was trapped in the fire. I quickly geared up and ran to the building where I could see a line stretched into the front doorway. I ran up the stairs past the pipemen manning the line. It was black and hot. It was apparent that whoever was ahead of me was in dire straits. It is funny how a minute seems like an hour when you are faced with an emergency situation with a running mate in trouble and everyone trying to find him. It seems like everything is acting out in slow motion.

Firefighter Jerry Wilson was actually calling for help when I got up there. By the time I got to him he was quiet. I tried to talk to him but got no answer. His mask was off so I took my mask and put it on his face. It was very hot and I found the floor was gone. I knew he was hurt bad. I didn’t realize at the moment that the mask was not doing any good because  the demand valve on the Scott Airpack only works when you inhale.

I proceeded to drag him toward the exit. It was getting hotter and brighter and finally I couldn’t move him anymore. I was exhausted by then. I found out later that the strap on his mask was hooked on the valve of the steam heating radiator near the door. I could hear the voices of Firefighters looking for us. It was getting very hot now so I hollered that I had a man at the top of the stairs. The heat forced me to dive head first down the stairs. Outside I told them I had Jerry to the top of the stairs and they said they now had him out of the building.

When I dove down the stairs the heavy steel tank on the Scott Air pack hit the back of my head causing damage I never recovered from. This damage, according to doctors, combined with injuries from the time I fell off the engine going to a fire gave the department grounds to build a case for a duty disability discharge. (That is another story).

I actually received a department citation for the Jerry Wilson rescue. The fire was at 8250 Grand River  at Ivanhoe Street.

I suppose there is more to the story but the best part was Jerry lived to fight another day . He returned to duty despite incurring severe burns over a large part of his body. I still don’t understand how he was burned in places that were covered by his coat and boots.

Jerry Wilson was half Cherokee Indian and legend says that because I saved him I now owned him. We laughed about that when we were in the hospital.

I only saw Jerry once after that. He returned to duty, God bless him. I was retired from duty. I left the department with my pension and the ownership of one Indian. 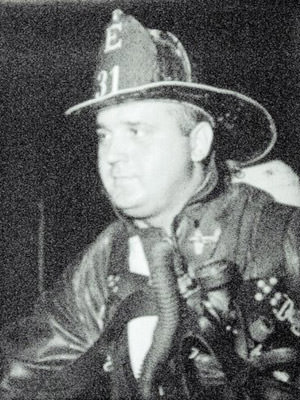