A lot of strange things can happen at a fire. Recently Detroit Firefighters were called to a dwelling fire. On arrival the owner of the house told the officer in charge that Boris the Talking Dog was trapped in an upstairs sleeping area. It was pretty smoky but a group of  Firefighters charged up the stairs and crawled into a rear bedroom where they found a black Lab passed out on the floor.

A Sgt from Ladder 23 took him outside and Boris started to revive. He was pretty wobbly at first but the fresh air soon got him on his feet. The Sgt asked the dog if he could really talk. He barked out a gob of black mucus than to everyone’s amazement told the following story.

"I discovered I could talk when I was very young. I wanted to help the government, so I joined the CIA. In no time at all they had me jetting from country to country, sitting in rooms with spies and world leaders, because no one figured a dog would be eavesdropping."

"I was one of their most valuable spies for eight years running. But the jetting around really tired me out, and I knew I was not getting any younger so I decided to settle down. I signed up for a job at the Detroit City Airport to do some undercover security. I wandered near suspicious looking characters and listened in. I uncovered some incredible dealings and was awarded a batch of medals."

"I got married, had a mess of puppies, and now I am just retired living here with my owner."

The Sgt was amazed and asked the owner if he wanted to sell Boris.

"I'll take ten dollars for him."

"Ten dollars? This dog is amazing! Why on earth are you selling him so cheap?"

"Because he’s a liar. He never did any of that crap."

A belated April fools day entry to all my friends and supporters in the Fire Service. Stay safe my brothers and sisters. 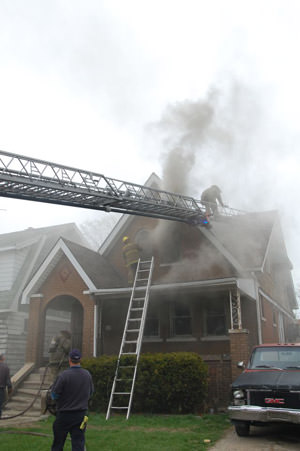 On arrival Firefighters are informed
Boris the talking Dog is trapped in the fire. 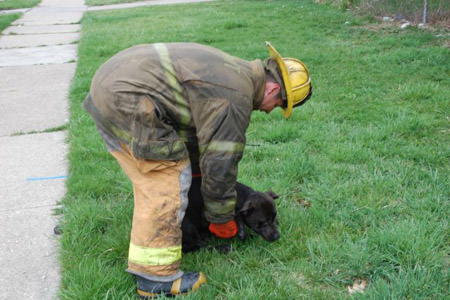 Holy crap. I woke up and the place was full of smoke.
A bunch of guys in masks who came in big trucks kicked
in the front door. I barked until I passed out. 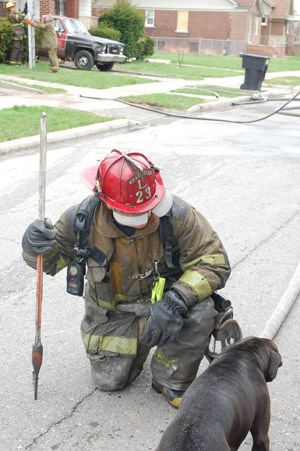 I woke up out here with you Mr. Fireman.
I know it was that damned cat who started the fire.
He was out all night and he smokes in bed.


All photos courtesy of Dennis Walus.