Tales of the 7th Battalion 2

Although the 7th Battalion contained a wide variety of industrial complexes the most dangerous and prevalent type of fires we encountered were dwelling fires. Especially challenging were the fires that occurred at night when people were sleeping. Getting people out of a burning building is a formidable task. Most of the medals awarded by the city are for rescues from dwelling fires. I can remember the first time I assisted in a rescue. I do not recall the location but it was 2 AM in the morning. We went from sleeping to the horror of fighting a house fire with people trapped in an attic bedroom in about 3 minutes. As we turned the corner to approach the location we found a two story house ablaze with a fire that was roaring out of control on the first floor. I was riding Ladder 8. Our responsibility was ventilation and rescue. Engine 27 was moving to the hydrant as we pulled in front of the location. A large crowd of people surrounded the place. They were an angry bunch. They were screaming at us to get in there and get the people out.

Entry was impossible. The fire was blowtorching out the front and rear doors. My running mate and I moved quickly. We grabbed the twenty foot extension ladder and ran toward the building. Despite the impatience of the crowd we had arrived quickly and were conducting a very professional operation. Water arrived to the pipe men who were kneeling putting on their masks. We got to the front porch the same time the water arrived. Looking upstairs at the dormer windows we could see two old people, a man and a woman, staring out at us with deadly fear in their eyes. They were moments from death. The fire was starting to curl over the eaves of the porch. A few more minutes and the inferno would move up and consume them. The Lieutenant in charge of the pipe men directed them to use the two charged lines to knock a hole in the fire so we could put up our ladder. The ladder was up in a flash and we ascended drenched in a continuing blast of water.

I was right behind my partner as we moved over the edge of the roof and crawled the last few feet to the window. He took his helmet and with a short snap of his wrist he hit the window. It shattered and the old man lunged outward almost knocking us off the roof. I got the old man turned around and after getting on the ladder I put him in front of me to climb down to safety. My running mate had a harder task. The old lady was a large woman. She was screaming and crying. It was hard to get her off the roof and on to the ladder. The only thing buying us time was the bedroom door which was still closed preventing the fire from reaching us. If the door burned through we would face a fire blasting out the bedroom windows like flames from a flamethrower. Other hose lines were now throwing water on us as we came down the ladder. It created a water tunnel for us to get through the fire. It was a successful operation. If we had arrived a few minutes later we would have lost those people trapped in the fire.

That night I was proud my running mates. It was a good rescue. 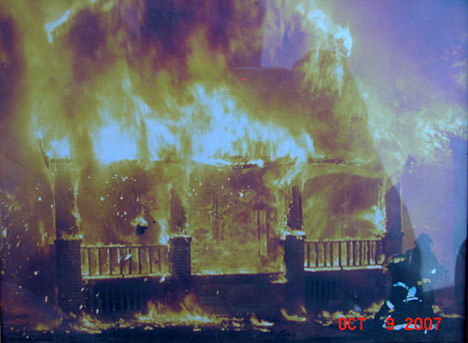 This is not a picture of the actual fire but it is uncanny
how it is so similar to what we encountered that night.

Any of you old 7th Battalion guys out there with a story please contact me at .