As a preface to this story I will say that Tom Kniaz was one of the best people we had working at the shop to keep Detroit Firefighters and their equipment in top shape. Tom eventually became a chief. His assistance to Local 344 during contract act 312 hearings was instrumental in getting Detroit Firefighters equipped with modern up to date turn out gear. Here is the story Tom sent me about his experiences during the 1967 riot.

Tuesday afternoon, Asst Chief of Apparatus Andy Magro gave me directions to the command posts and told me to take the department fuel supply truck, radio code # 507, and to fuel up the apparatus at the command posts including the rigs from other cities. He told me to stay off the expressways.

The majority of apparatus in 1967 were gasoline powered. The fuel supply tanker at that time was department code #874, a 1954 Ford F-600 that carried 500 gallons of leaded gasoline, as well as motor oil and automatic transmission fluid but no diesel fuel. The tanker was equipped with cowl and roof mounted lights and a siren.

I was 25 years old at the time and had been a member of the Apparatus Division for 14 months. I thought it was a great job and did what I was told.

My first stop was the command post at E-42's quarters. On the way there I could hear all the dispatches from Central Office and could see the smoke in the sky in various parts of the city. I thought to myself, "This is exciting."

I finished fueling the trucks at E-42's quarters and 2 hours later I was on my way to stop number two at the Department Training Academy. Driving south on Grand River I felt the first stone hit my tanker and a couple of others came close but missed the target.

I fueled up everyone at the training academy and headed for E-52's quarters on the far east side via Forest Avenue. Traffic was light because of the curfew so I began using the flashing lights and sirens at major intersections rather than stopping completely and taking forever to get the tanker rolling again. I got pelted with more rocks and bottles as I crossed Gratiot Avenue, and again at Forest and Cadillac Blvd. This was going from EXCITING to downright SCARY.

When I arrived at E-52 I discovered the 24 hour Apparatus Emergency Repairman had a National Guard escort. After talking to him I called the shop and asked Chief Magro if he could arrange an escort for me. He replied he would try. An hour went by and I called again. The chief said he was working on getting the escort and that he would call me back. A half hour later he called to say my escort would be a Michigan State Trooper who would follow me in his marked car. Later that night he was called away and I was on my own again. I heard a fire captain say, “Hey kid, take that truck back to the shop, take off the lights and flashers, and paint it white. Make it a milk wagon.

I eventually returned to the shop unhurt and found out Chief Magro had earlier asked two more senior employees to do the refueling. They refused and politely suggested he give the job to the low seniority guy.....ME!

I subsequently did wind up working on a white truck the next day. I replaced the clutch in a Lansing Fire Department white Seagrave pumper. It was from one of the many departments who sent men and apparatus to Detroit during the riot.

Bob, that's my white milk wagon story. Like you, I have many recollections of my 30 years on the Detroit Fire Department.

I thank Tom for this interesting tale. It seems like the low man on the seniority list gets all the tough jobs. Tom did a great job during the riot as did all the support personnel. I cannot imagine the difficult job that Central Office had at that time. It was dangerous trying time for everyone on the Fire Department. It seemed like it happened just yesterday. Where the hell did the time go to? 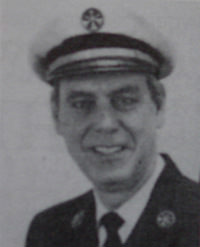