At two o'clock in the morning the alert goes off. The sleeping Firefighter is jolted out of a deep sleep. As he scrambles into his clothing, his heart goes into high gear. His body responds by dumping adrenaline into his blood stream. Nature’s drug prepares him for action. He is down the pole and into his turnout gear as the fire rig roars to life. He is out into a cold December night with temperatures hovering near the zero mark. About 90 seconds have elapsed and his body has had to contend with a sudden awakening, quick energetic movements, and two temperature changes.

As the rig rounds the corner he sees the top floor of a two flat completely involved in flames. A man with his clothes on fire leaps from a window and crumbles motionless on the concrete driveway. The Firefighter’s body gets another jolt of adrenaline. His heart is pounding and a million years of evolution prepares him to fight.

People are screaming a child is trapped in a rear upstairs bedroom. A ladder is being raised and the Firefighter is running in his bulky gear. He stops momentarily to put on his mask and turn on his air. In a matter of seconds he is up the ladder and into the building. The heat drives him to the floor and the skin on his neck tingles from another extreme temperature change. The room is full of hot, thick, dirty smoke. Panic grips the Firefighter when he realizes he has lost his bearings. He trips on the body of a small child. He snatches up the body and desperately moves along a wall looking for a way out. His mind is racing a mile a minute and his body is functioning at many times a normal rate. He finds a way out and survives another difficult fire.

A short eight minutes have elapsed since the Firefighter was in a deep sleep back at his fire house. In that short time period he has been through extreme temperature changes, excitement, fear, panic, tremendous physical effort, and emotional strain.

This scenario may not happen every day but it happens often enough to shorten a Firefighter's life span. It is a common occurrence in big cities. The smaller departments and volunteer units may not have the same exposure but anyone in the fire service for any length of time will surely experience this type of situation. All the above described events are stressors. The constant career long exposures can lead to heart disease, high blood pressure, and other health problems. These facts are confirmed by studies made by the International Association of Firefighters.

These things are accepted by you men and women who choose to be Firefighters. You are a special breed. It is important that you stay in shape, train as much as you can, and be sure to get a physical at least once a year. The general public has no idea of how hard the job of Firefighting can be. It is important we educate them. An informed citizenship  will be the ones who vote on the funding for your fire department. 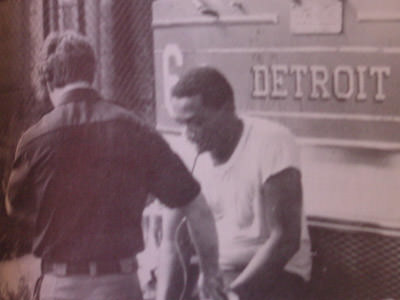 A Firefighter gets air after a difficult rescue. 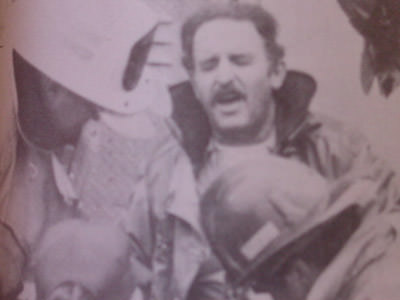 A future Chief of Department pays his dues. 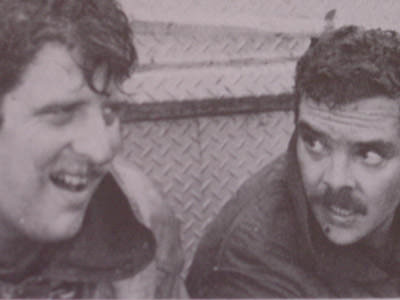 Two squad men take a break after a tough fire. 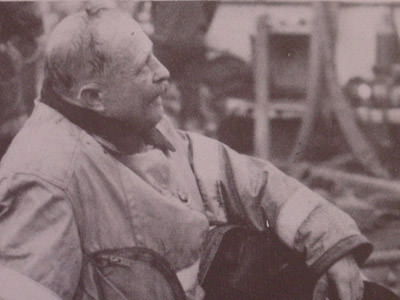 Buggsy Baxter left it all in the fire and
tries to recover outside on the street.