Tales of the 7th Battalion 19

There are days when a fire company will be short of manpower. In Detroit the department will detail a man in from another company to fill  necessary manpower needs. Sometimes the detail may come from the far side of the city. We once had an east side Firefighter detailed into the 7th Battalion. He was a boisterous fellow. He bragged about his firefighting abilities and about all the things he was knowledgeable about. He decided to help one of our guys.

The senior Firefighter at Ladder 8, John Lisuk, was just finishing a project he had been working on for months. He was building a motorcycle from  parts he acquired at  local junk yards. It was an odd looking thing. The frame was from a world war I dispatch bike. It had long handle bars and a huge light on the front fender. It looked like an iron racing dog with wheels. The detail man said he knew all about motorcycles. He bragged that he was a great motocross racer. “If you finish it today I will give it a test run ,“he told John.

John agreed to give him a chance to show his stuff. The engine was roaring when he popped the clutch. He took off, like a rocket, heading for the alley between the buildings next to the firehouse. He let up on the gas and applied the brakes. Nothing happened. John had mistakenly installed the throttle and brakes in reverse. The detail man must have been doing 40mph when he dropped his feet to the ground. There were two gravel rooster tails following his heels as he accelerated to 60 mph and started to do a wheelie. The more he tried to let up on the gas the faster he went. He never touched the alley. He was screaming when he hurtled into the air from the parking lot and hit Mrs. Swartz's chain link fence. The barrier acted like the dog catching net at a dog track. I am sure it saved his life. The fences around the yards for the entire block absorbed the shock and squeaked and shook. I saw two of the neighbor's cats claw their way to the top of a tree in a matter of seconds. The sky was full of squawking birds that had just settled in to roost for the night. There must have been 50 dogs barking and howling by the time we got to the detail man. He was scratched and bruised but was O.K. He was mad as hell at John. John was mad as hell at him, for wrecking the bike, and Mrs. Swartz was pissed off about the big motorcycle shaped bow in her fence. It was another typical day in the 7th Battalion. 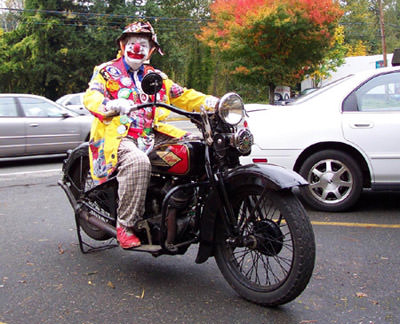