There are many incidents that can define a police officer’s career. As young officers, you look up to everyone and everything. You can’t help it. You simply don’t know any better. Rookies are scrubbed and clean shaven. Their uniforms are neatly pressed and their boots have a mirror shine. Yet they secretly yearn to look like veteran officers. They don’t want to be new out of the box, they want to appear worn and experienced even if they are not. Watching a veteran officer walk by with a bunch of citations pinned to his uniform leaves an impression. The young officers have no idea what the ribbons are for or how they  were earned. Those decorations and a confident stride are all that is needed to impress the newbees.

I was in that boat as a young officer. I was paddling along with the rest of them. That is why, to this day, I have a place in my heart for rookies. As you gain experience with time on the job, you realize what is what, and who is who. When you get an opportunity to do something rookie officers will never forget, you better jump all over it. Who knows? The incident itself may turn into a department legend.
I was the officer in charge of the Robbery Team, when just such an opportunity came up. One of my squads had tracked down a robbery suspect and arrested him on the east side. This was routine stuff for us, but the phone call that followed really upset me.

The story started with the officer telling me how they first spotted the suspect. He was driving a pickup truck with a second suspect seated in the passenger seat. Once they had positively identified the main perpetrator, they made a felony traffic stop. Using caution, all four officers approached the suspect’s vehicle with guns drawn. They ordered both suspects to raise their hands. They both complied. Problem was, when the passenger raised his hands, he was holding a four foot alligator. This immediately triggered all kinds of police action. The main suspect was pulled from the vehicle, forced to the ground and cuffed. Now the two officers on the passenger side, where yelling, “Dragon, alligator, gila monster,” and any other identification they could think of. They were jumping around, bound by duty to cover their partners, but they were terrified they were going to be either bitten or incinerated by this fire breathing beast. The two officers cuffing the suspects were focused on their task. Their eyes were big as saucers as they heard their partner’s descriptive yells.  Their panic did not faze the alligator, who surveyed his kingdom from his elevated position with his mouth agape. Dragging the first suspect to the passenger side of the vehicle, the first two officers were now jumping around with the others, screaming “Drop the alligator. Drop the damn alligator.” Luckily the second suspect lowered the alligator. With pleading voices, the officers instructed him to exit the truck, and leave the alligator in the vehicle. The suspect complied and was quickly cuffed. With both men secured and the alligator locked in the truck, the officers could get back to being the police. Their nerves were a bit frayed, and there were several over the shoulder glances back at the truck, but they had gathered enough composure to complete the investigation. They soon discovered they did indeed have the right person , but the passenger was not wanted for any offenses. The vehicle came back clean and properly registered. They were going to let the passenger and alligator go. The alligator seemed to be some type of violation, but they couldn’t figure out what.  Not wanting the passenger to carry the alligator down the street, they released the truck to him. The interior of the truck would have to be searched before they could let it go. Now the passenger was instructed to do exactly the opposite of what he was previously ordered. He was instructed to slowly open the door, and to pickup the alligator. All four department issued weapons were at the ready, as the officer jockeyed for positions. If someone yelled boo, the poor alligator and passenger would have been toast. The officers quickly searched the vehicle. No evidence or contraband was found, and the passenger was allowed to load up his reptile and released.

Great story, but here is the part that was bending my mind.
Imagine what the rookie officers in the precinct would have thought when they saw veteran plain clothes officers bringing in a suspect wanted for multiple robberies and they were also dragging a roped dragon behind them that was hissing and twitching its tail.

Now that is truly the stuff of legends. 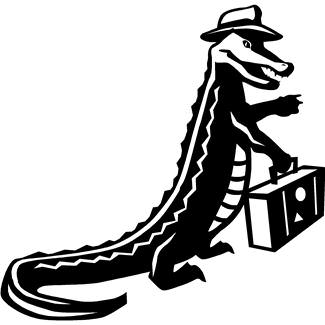